This article features Michaela Barker’s outstanding NCEA Level 3 Painting folio, completed in her final year of high school at Waikato Diocesan School for Girls, Hamilton, New Zealand, 2012. Michaela was awarded Excellence for this project and her work was chosen to tour throughout New Zealand with the Top Art Exhibition. Michaela was also awarded Scholarship for NCEA Level 3 Design and Dux of her school.

Through her portfolio exploration, Michaela has investigated advances in technology as well as raising awareness of some of the issues surrounding these advances. The idea of addressing contemporary issues such as electronic waste (also known as e-waste) in her work came from a suggestion by her Painting teacher. Through art, various issues can be addressed. Michaela has addressed the current issue of e-waste as well as the Art History concept of appropriation.

At the beginning of her project, Michaela focused on using a range of easily identifiable electronic items such as floppy disks, cell phones, iPhones, computer monitors and the earphones and wires associated with these devices. The image of the overlapping floppy disks (top right-hand corner of panel one) is reminiscent of the work by New Zealand artist Alexander Bartleet, who creates artworks out of waste products.

Throughout her portfolio investigation, as well as using electronic devices, Michaela has used various images that are symbolic of technology from advertising and contemporary art. The ‘Apple’ brand, while used widely as a symbol to represent technology itself, has also aided in the development of the artworks. Pixelation is also a concept that is associated with technology and digital imagery. The concept of pixelation links with the structure of the grid that many of the paintings use, including the grid that is formed by the use of square floppy disks.

The second panel of the portfolio shows Michaela’s intention to introduce more colour into her paintings. Colour is introduced through the pixels which are composed in the style of a floating grid, and later the DNA helix. The colourful images link with the Andy Warhol inspired image on panel three, through to the two final paintings. Colour and pixels are both developed into final paintings on the third board. The middle painting on the top row is an appropriation of Rene Magritte’s The Son of Man. Here Michaela has replaced the apple with the logo of the Apple brand.

Appropriation in art has been used throughout history. Digital technology allows images to be viewed and copied easily, and makes appropriation an important issue in contemporary art. With the aim of producing thought-provoking works, Michaela has appropriated images and iconography from a number of well-known artists and sources. The detail from Michelangelo’s The Creation of Adam has been appropriated to create a powerful painting. The tension of this image is echoed in later works that look specifically at the contrast between wealth and poverty.

A striking aspect of this portfolio investigation is how the artist has looked at the relationship between poverty alongside the advances in technology. The contrast between these two worlds is significant.

Although the majority of the paintings were completed with acrylic paint on paper, this portfolio is a clear example of experimentation with a variety of materials. Paper towels were used as a way of creating an interesting surface to work on, as can be seen in some of the initial sketches on panel one. Banksy has been an important influence, both in terms of ideas and technique. Evidence of the use of stencils and spray painting can be seen in a number of artworks. As an artist who is an active voice in getting people to discuss controversial issues, Banksy is an appropriate artist to investigate for this body of work.

Other experimentation with materials includes ink pen and acrylic paint used on tracing paper. The tracing paper has then been placed on a recycled computer instruction manual to create layers.

As floppy disks are a redundant technological item, the use of e-waste items as a painting surface is an appropriate and innovative medium. Nick Gentry has been used here as an artist model. The fact that the floppy disks have been used as subject matter and then later as a painting surface in final images is an example of the different ways that development can be shown through artworks and through ideas, as well as imagery and development of materials.

The systematic development of the body of work in a portfolio is important in creating a successful NCEA Painting submission in New Zealand. Throughout the year, Michaela photographed her paintings once they were created. She then used Photoshop to create a ‘virtual folio’. This meant that she could visualise how her work was progressing and test how she wanted the paintings to be laid out on the folio boards.

Planning was also completed using Photoshop. Initial sketches for a composition were sometimes drawn on paper and then later digitally manipulated in Photoshop to add in more details. Using the digital medium to manipulate compositions meant changes could be made with ease before the paintings were created on paper. The types of changes that were able to be made using Photoshop were things like trialling different colours and resizing parts of the proposed painting.

This article was written using information provided by Michaela Barker. If you enjoyed this art project, you may wish to view our other featured painting and drawing projects from high school students around the world!

This article was written by Maryann Darmody. Maryann has a Bachelor of Fine Arts, Bachelor of Arts and a Post Graduate Diploma of Teaching, with additional papers completed in Architecture, Design and Interior Design. She is currently a NCEA Visual Art teacher at a secondary school in New Zealand and has taught NCEA Art History online for 4 years. 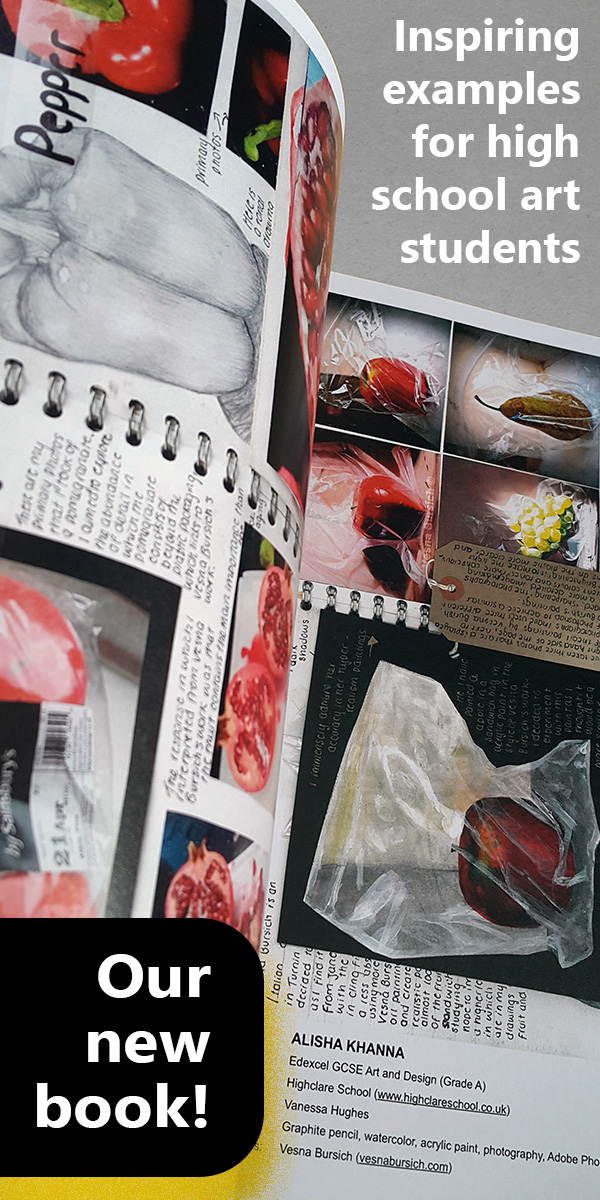